If we had a nickel for every time someone asked us this question! This question may arise if you’ve ever baked a pie from scratch or made our buttercream frosting. We asked our test kitchen to give us the 411 on this mysterious ingredient.

Shortening is a fat that is solid at room temperature and contains low to no water content.  Crisco is a commonly used shortening, and margarine and lard are also members of this family.

Because shortening is made of 100% fat and contains no water, no steam is created during baking. This results in a dough that’s softer, flakier, and more tender. Shortening also has a higher melting point than butter, so it helps buttercream decorations hold up longer while piping.

Why should cake decorators use it?

People often ask why we recommend using a combination of shortening and butter in buttercream frosting rather than just butter. Here’s why:

A Brief History of Shortening

Where did shortening come from? Hydrogenated vegetable oil was invented in the early 20th century. Since then, shortening has become almost exclusively synonymous with these fully saturated fats. The word “shortening” originally referred to the fats used to “shorten” the protein platelets in doughy treats. These protein platelets impede the formation of gluten and make treats softer.

What does this mean?

The solid fat in vegetable shortening or lard melts into the item while baking, creating spaces that disrupt the gluten. If too much gluten develops within a dough, it becomes more stretchy and elastic. Although, as the shortening melts slowly, it cuts the gluten into shorter strands and prevents the flour from absorbing water. It’s science!

Vegetable shortening was initially created in 1910 by Procter & Gamble as a cheaper alternative for lard and tallow*. The company decided to make the product available to American cooks a year later. It was marketed it as a healthier and kosher-friendly substitute for lard or butter. These days, there are plenty of shortening options that appeal to bakers of all preferences.

Crisco is the most popular vegetable shortening choice on this side of the Atlantic, and UK bakers turn to brands like Trex, Flora White or Cookeen. Australians reach for Copha. Lard is the best substitute for those who don’t mind using animal fats in their baking. However, we don’t recommend it as a shortening substitute in buttercream frosting. Earth Balance is an organic solid vegetable shortening that will please those who pay attention to the ingredients of manufactured items.

In a pinch and can’t get to the store? Butter will certainly work as a substitute. When substituting with butter, use more butter than instructed and reduce the amount of water added to the baking mix. This will counteract the additional water content of the butter and help you achieve beautiful frostings, pie crusts, and other baked goods.

Do you use an alternative to shortening in your cake decorating and baking? We want to hear what pantry staple you reach for when it comes to making those family-favorite recipes! *Forristal, Linda Joyce. “The Rise and Fall of Crisco“. The Weston A. Price Foundation. February 23, 2009. Be sure to tag your photo #BakeYourWorldHappy 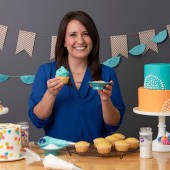 Desiree is the Public Relations Manager at Wilton. She spends her days monitoring media opportunities, working with newspaper, magazine and television contacts, collaborating with bloggers and handling a variety of other odds and ends. Desiree has a degree in journalism and experience writing for newspapers and television. Outside of Wilton, she enjoys running and planning outings with friends. How to Use the Wilton Dessert Decorator How to Make Flavored Buttercream Frosting How to Pipe Buttercream Roses